Energetic design. Asymmetrical, yet balanced. This whole apartment building, Castel Béranger, is Art Nouveau. It was architect Hector Guimard’s first important work, and it was noticed.

Soon afterwards, he was awarded a commission to design entrances to the new Metro. There had been a design competition, but Guimard had not officially entered it.

The structure is iron, exposed, and made decorative. These are characteristics of Art Nouveau architecture. The iron is painted green and in forms that suggest plants, flowers, and Crustacean-like designs (below). These entrances made Guimard famous, but at first Parisians weren’t sure that they liked them. The cast iron could be made elsewhere, so this was practical.

One of Guimard’s entrances is in the sculpture garden at the Museum of Modern Art in New York. Huge plant-like stalks have flowers or buds which are actually amber glass lamps.

People sensed a stagnation in the western world. They called their time fin de siè·cle, meaning “end of the century.” They looked forward to the 1900s and wanted change. Paris was to host a world’s fair, and the Metro was built in anticipation of this 1900 Paris Exposition.

I love surprises when I travel, and I spotted this around the corner from the charming Metro entrance I photographed (Abbesses, in Montmartre, Paris).

The door was open, so I went inside.

It’s a more restrained Art Nouveau. There’s no asymmetry as in the gate by Guimard. The style is subdued because it is a sacred space and maybe because it’s a departure from the other churches in Paris, which are older and traditional in style. This is considered the first modern church in Paris.

The Church of Saint John (St. Jean) was built over several years that spanned 1900. It took so long because construction was halted due to concerns over structural safety. The building passed tests, and the world’s first church made of reinforced concrete was completed in 1904. The architect was Anatole de Baudot.

Imagine. Those Metro entrances were being built at the same time as this.

My next post will appear on July 1. I hope you enjoyed Paris. 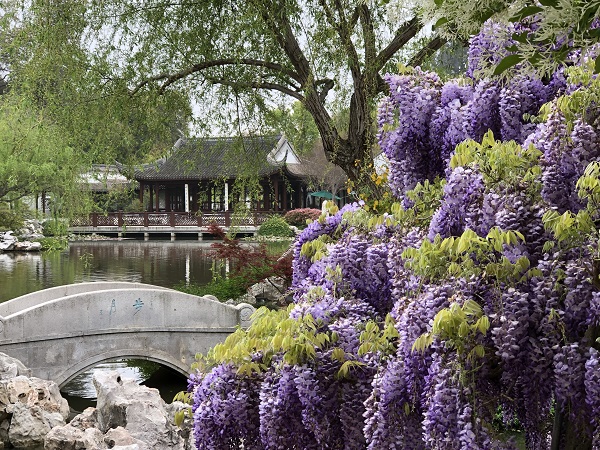 It’s National Public Gardens Week, and the only garden I have seen is at my house. (I feel lucky to have that.)

I miss the Huntington Library, Art Museum, and Botanical Gardens. This was once the home of Henry and Arabella Huntington.

The “Temple of Love,” above, is surrounded by “Passionate Kisses” roses.

The Huntington has a newer Chinese Garden.

But We’re at Home

Adults can print and color pages from America’s Garden Coloring Book. The Huntington is featured, and there are origami projects.

The Huntington is also an art museum, famous for Blue Boy. Due to the pandemic, this is the kind of art I am seeing now, at home.

I love how this art is stylized. There are no gradations of color in the birds, and the angle of their wings is precise. You may have noticed that the puzzle has only 300 pieces. I ordered puzzles when I began to confine myself to my home, and I got easy ones. Slim pickings online, by the way.

I was also not above buying cheerful puzzles which I will one day share with the children in my family. Really, I will. I need happy, easy activities now.

I have seen recent silly movies too many times to watch them again. Dumb and Dumber. Happy Gilmore.

For comedies I haven’t seen a dozen times, I watched some from the 1960s. After the Fox stars Peter Sellers, and my brothers and I must have watched this every time it came on TV. I never found a video or DVD of it, and I was afraid it had faded into obscurity. I found it on Amazon Prime.

The famous playwright Neil Simon wrote the screenplay, and the music is by Oscar-winner Burt Bacharach. Here’s the original trailer, from 1966:

Can you recommend a favorite goofy movie?

I’ll get serious this week, and next weekend, we’ll see a bit of Paris from 1900, the Fin de Siecle. Stay safe.

Want these in your inbox? Subscribe by entering your email on a tablet, laptop, or desktop.

The Cheyenne Club opened its doors in 1881. It was three stories tall with a kitchen and wine room in the basement. Servants trained in the East poured the finest liquors, which were brought in by train. Two vaults for the expensive wines. Caviar.

Members enjoyed a billiards room and a reading room with magazines and newspapers from the East. The club was decorated with paintings and thick carpets.

While the cattlemen dined in luxury, the cattle were left to fend for themselves during the winter, to find grass and unfrozen water or die. Even at the time, other people pitied the distressed animals.

The harsh winter of 1886-7 killed more cattle than usual, and the investors lost money. That spelled the end of their Cheyenne Club. Here’s a photograph of their grand building.

I drove up the hill with two golfers, my husband and our friend Larry Franklin, who raved about the golf course, but our first look at the clubhouse startled us. Overlooking a large valley, hugging a hillside, the clubhouse looks futuristic. 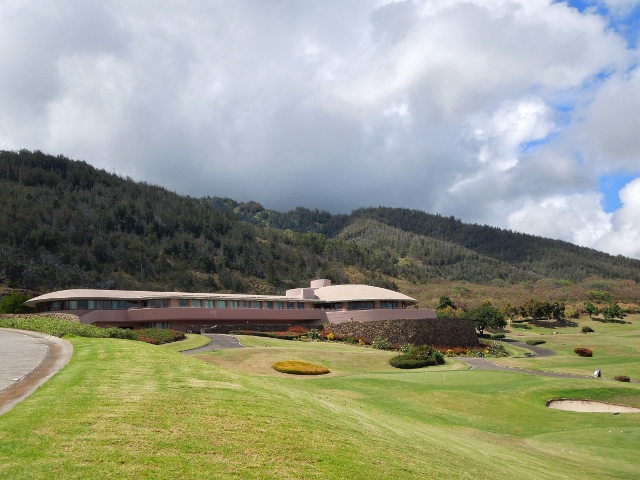 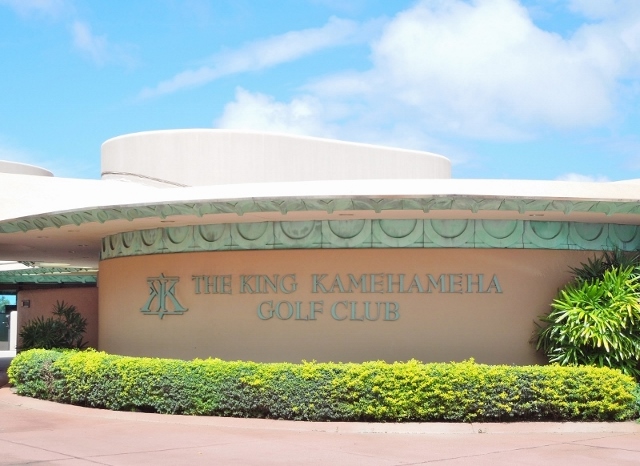 Built in 1993, decades after the passing of Wright, the clubhouse of the King Kamehameha Golf Club, is from archived Frank Lloyd Wright designs for a structure or structures that were never built. They were adapted by Taliesin Architects.

Check out the link above. It has photos of a side with circular windows, and the interior, which I did not get to see. It is a private golf club. (Golfers can sample the course with a day pass.)

The video on the page, from the Golf Channel, says the design was based on a home for a certain screen legend. No spoiler from me.

The website also devotes a page to Frank Lloyd Wright’s design, with more photos.  I’m glad I bought that travel guidebook! I did not expect this in Maui.

If you did not see me in my 1890s costume at the Los Angeles Times Festival of Books, “the country’s largest literary event,” and  missed my photo in the  Times’ print edition (which got me out of bed in a flash Monday morning), see the link on the “About Pamela” page of this blog.  Click on the tab above to get there.  Yes, the costume was fun.