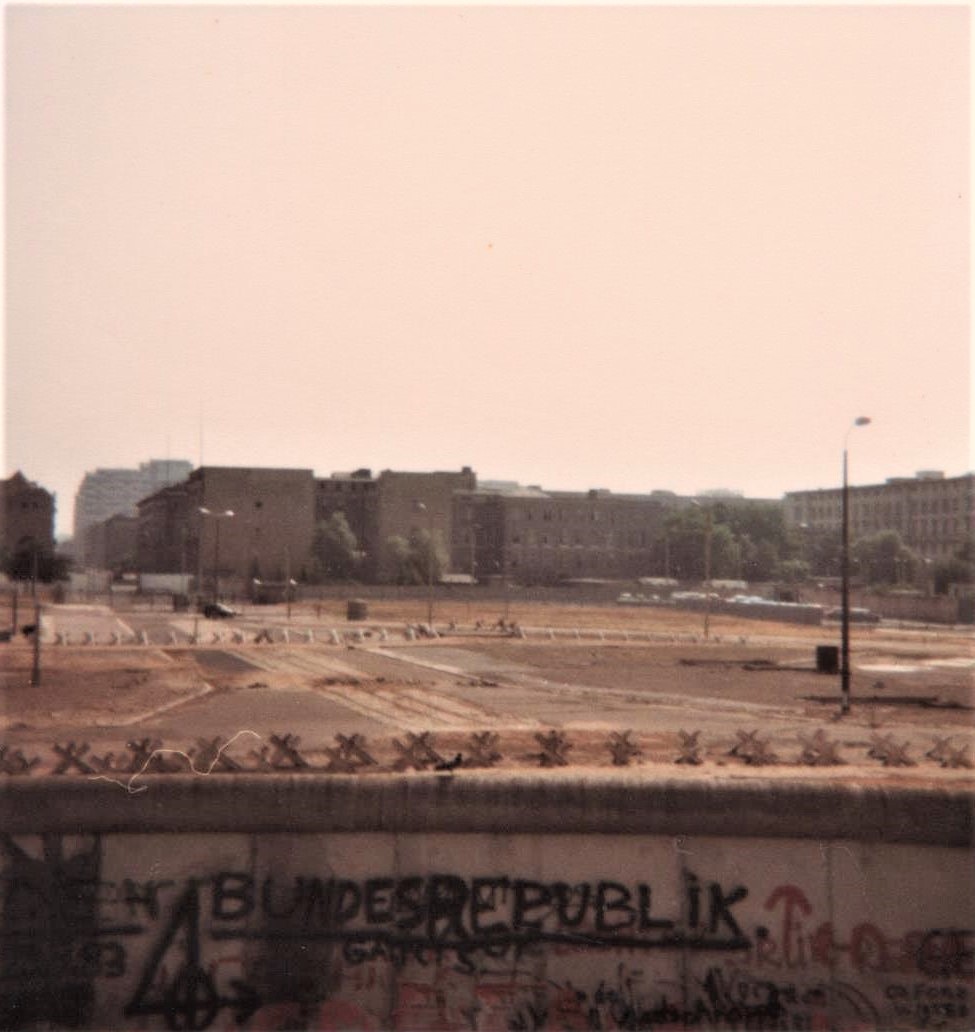 I passed through the Berlin Wall. Even though I was an American tourist, my trip through the Iron Curtain and into the DDR changed me. In 1983, there was no grafitti on the Communist side of the wall. Nobody could go near it.

It was assumed that the East German guards in the border towers, like the white one above, had machine guns to kill their fellow citizens. The vast majority of East Germans could not leave the DDR until they reached retirement age. They could see, beyond the Berlin Wall, the buildings of free Germany. They could also see this inspiring banner of Polish workers successfully challenging their own Communist government.

I boarded a tour bus in West Berlin for a trip to the East. It stopped at Checkpoint Charlie. We crossed through and had a tour of East Berlin. At the end of this post, I include links to sights.

Everyone had to get off the bus and stand single file on a long line painted on the pavement.

The stern young border guards appeared, wearing the military uniforms of a Communist country. I had nothing to fear, but thirty years later, I get a chill down my spine again.

A border guard examined my passport photo. He looked up and studied my face for at least five seconds. When he was sure I was not an East German seeking freedom, he handed me back my passport.

A guard produced a hand truck like the one below, but with a mirror on the bottom.

The guard moved the hand truck under the edge of the bus and looked at the mirror on the base. He was looking for an East German resident clinging to the undercarriage. He moved the hand truck in and out, all around the edges of the bus. Later, I crossed the border on a train in the countryside, and the same thing happened. After checking our photos, the guards looked under the long train seat for a person.

The Next Day, A Solo Trip

The following day, Communist Berlin pulled me like a magnet, and I went alone. I found poverty.

I went in a produce store where half a dozen people shopped. Everyone had little potatoes in their basket. Just the potatoes, except one woman had a dirt clod with a bright orange dot. It appeared to be a carrot, or bunch of carrots, in a dirt clod.

An attractive sign high on the wall said, “Apfels,” but I could not find apples or any other fruit.

I walked in a nice area and saw images of Marx and Lenin. I ate in a pleasant restaurant and pitied my waitress her lack of freedom.

I came to a rundown neighborhood and saw the rubble of a brick building.

I believe it was damage from the war, forty years before. Next to this, someone had spray-painted a cry for help.

They had written it in English. As if we could help them, I thought.

I mailed postcards from East Berlin to the U.S., and they took five weeks to arrive. My friends back home said, “Well, the censors had to read the postcards.” Yes, but five weeks to read three sentences?

Where the Tour Bus Went

A Military Cemetery With Propaganda

East Berlin, and East Germany (DDR), were the Soviet Union’s slice of the pie when the victorious Allies divided up Germany. My tour bus stopped at the Soviet Memorial in Treptower Park, where more than 7,000 Soviet soldiers are buried. They lost their lives in World War II. Our tour guide told us an inflated number, 25,000 soldiers, 5,000 in each of the five great rectangles of lawn.

I heard these museums were spared from Allied bombing. An island in a river is easy to see from the air. We were taken to a museum with the famous Egyptian bust of Nefertiti.

At the Pergamon Museum, I was amazed to enter an enormous room containing part of a Greek temple. It’s the Pergamon Altar, and visitors walk up the ancient stairs. The many marble figures appear to be life-sized or larger. In another room, I walked down a walled street taken from ancient Babylon. Those walls are covered with beautiful blue tile.

The museum’s website has videos and a photos of collection highlights.

8 thoughts on “My Trip to Communist East Berlin”